This post is specifically about PODD (Pragmatic Organisation Dynamic Display) Communication Books (i.e. the non-electronic paper books) developed by Gayle Porter. Although other systems are also great, the list function in PODD books has been on my mind lately so I thought I’d write about it.

Lists are one of my favourite parts of the PODD. As a certified PODD presenter, I love the part in the workshop where we get to talk about lists and show examples of how they are used for real and meaningful interaction. There is a great video of a young girl talking about her holiday and listing off all of the places they visited on their last holiday. She uses words (names of places) that she didn’t even know before the holiday, and may not use regularly after a few weeks, but they were definitely motivating and relevant at that point in time. Had her mum not added these words to her list while they were on the holiday, she would never have had the opportunity to tell others where she had been – something all of us enjoy when returning from a vacation. 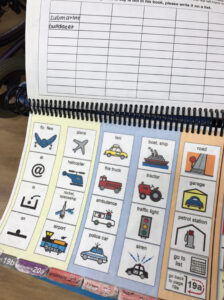 Lists in a PODD communication book are a way to add vocabulary that is not frequently used or pre-planned. When Gayle Porter, the developer of PODD, created the vocabulary within the PODD it was intended as a starting place. Core words along with others  that had been frequently used by others in the process of development were included and less frequent words may have been left off to avoid a book that is double the size. Vocabulary selection in augmentative and alternative communication (AAC) is an  exercise in prioritisation. The most common words and those that need to be used quickly get the prime position on the front page (or as we sometimes say, the waterfront properties) and then the rest of the vocabulary is prioritised on other pages depending on the speed of navigation. Some words just don’t make the cut in a generic starter PODD especially those with fewer items per page as they have less vocabulary options available.

Never fear though, Gayle added ‘Lists’. Along with blank squares on some of the pages for people to add their own individual priorities, each section of the PODD has access to a list. The lists come in various shapes and sizes, but all of them allow for vocabulary to be added when it is needed. For more information on the Lists in PODD, refer to the Printable book Pragmatic Organisation Dynamic Display Communication books available on the Direct Access templates CD, or or the 2 day Introductory Workshop manual if you have attended a workshop. Gayle explains it much better than I do. If you don’t have access to these, then ask the person who made or prescribed your PODD for more information.

What I love about lists is the ability to add words in the moment and to talk about things that are specific to an individual, or that others may not know. The girl in the PODD workshop video tells her friend that she went to a place called ‘Seventeen Seventy’ in Qld, Australia. In all of the world, I would never guess that as a place name, and even if she had used the numbers page to tell me, I probably wouldn’t have made the connection, but on the ‘Holiday Places’ list, I figured it out easily.

Being interesting to others means we have things to say that others cannot guess or even figure out. Fringe vocabulary is a very important part of our conversations and sharing the information we have learned. Many children learn about new places, things, people and concepts at school, but without those words being added to their communication systems, they will not be able to share with others what they have learned. What is the point of learning something if you can’t tell anyone about it? Who knows when you will need to use the word ‘Rumplestiltskin’, ‘Hogwarts’ or ‘Prince Harry’ in the context of a conversation? That’s why we learn about these things – to connect that learning with other learning or experiences and talk about them to learn new things, or to share information with others. Imagine someone telling a person who uses AAC that they have just returned from a visit to England. The AAC user might ask “Did you see Prince Harry?” because they had just heard about him the week before at school. That would be a very appropriate comment to make, but only possible if Prince Harry was added to the list of famous people. 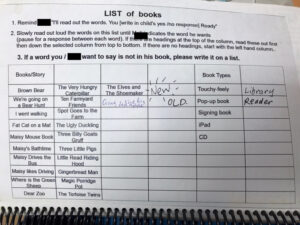 As discussed in the PODD manual, lists can be words or symbols, and lists can also be sub-categorised. As a general rule, if you are a communication partner and the child/person who uses AAC is experiencing, talking about or showing interest in something and the words are not in their book, that’s the time to add some key words to the lists. The person may not immediately use these words, but it’s important that they know they are there and how to find them (you can do this by modelling their use). It might be 6 months before they are used again, or 6 minutes. But if they are not there, they cannot be said. Remember that a person who uses AAC but is not yet literate, can only say the words that we have provided for them to use. Yes, it might take a while for someone to find a word on their list, but at least they can do it. If we neglect to add the word then even if they are thinking about that word, there is no way for them to say it when they want to. The time it takes you to grab a pen and write the word into the list is far less than the time it will take you to figure out what the person is trying to say at a later date.

You might think that a word is not relevant to someone else and decide it’s not worth adding, but when you do this, you are making decisions for the person. Of course you can try to prioritise the words on the list and put the most likely ones at the top, but remember, it’s not your voice, it’s theirs. Imagine if someone else were filtering your experiences and deciding which ones you could talk about in the future and which ones you could only think about. 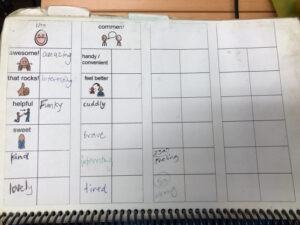 So go ahead and fill up your lists. It will make for much more interesting conversations for both the person using the PODD and their communication partner. There are other strategies for expanding vocabulary that I will talk about another time, but for now have a go with your lists and explore diversity in your child/persons conversations.

Remember, communication is how you show your personality. It’s sharing, boasting, questioning, complaining, loving and saying something just because you want to. Everyone should be heard. (our vision statement). Lists and adding new words to any system is the process by which conversation can be personalised for someone who uses AAC, and allow them to say the words they are thinking.