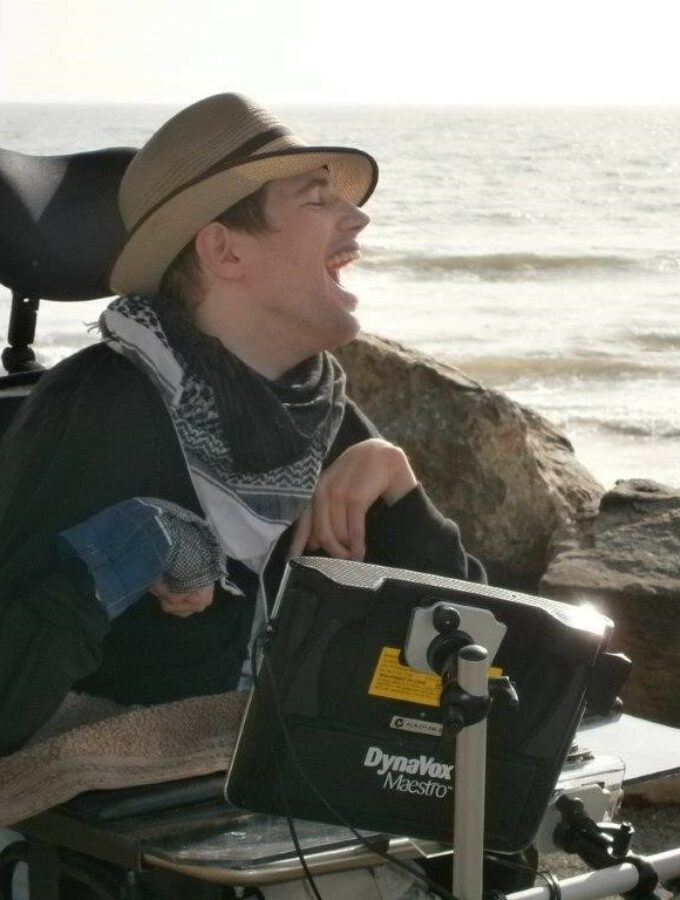 Even though he can’t say all of the words, Ollie can still swear to de-stress by using his Sequencing App

We all know how good it feels to just let off steam sometimes when things don’t go the way we plan, or the stress of life builds up. It’s just the same for Oliver, a 28 year old man, artist and poet, who has complex communication needs. He may not be able to swear/speak verbally, but he can still vent his frustrations with fast access to a sequence of swear words carefully selected by Oliver using partner assisted scanning, then programmed into an app that allows for simple sequenced messages. In this instance we used TapSpeak Sequence, but any other sequencing app would do the trick

Oliver has so much to say and when given time to select the words he wants, he can communicate complex messages, write poetry and take control over many aspects of his life.

One day, I went to visit Oliver and I immediately noticed he was tense and upset about something. I gave him the opportunity to tell me what was upsetting him, but he was so tense he couldn’t reliably move his body to confirm his message when I scanned the pages of his PODD communication book. His body and his movements were so stiff that day, it was difficult for me to read them. I asked if he just needed to ‘let it out’ first and he almost burst with a resounding ‘yes’ response. So over the next 20 minutes I read from a list of swear words and he chose which ones he would like to use and in which order. (There were quite a few repeats of certain words too J). The end result was a great ‘venting sequence’ that we programmed into his sequencing app. Oliver then sat there for the next 10 minutes swearing away happily until his body slowly relaxed and he was actually laughing about what was happening. It worked!! He has since used it quite a few more times with similar success and when asked what he thinks, Ollie says “I use (my ‘venting sequence’) when stuff happens that I don’t want to. Like seizures and more”.

In my 25+ years of working in this field, that moment had to be one of the most satisfying. I love my work and those golden opportunities when people who have little or no speech find their way to say what they are really thinking, not what others decide that we want them to say. We all need to vent, and it makes us feel better. Words are not just for choosing food or activities, they are also for sharing, loving, boasting,…..or saying something just for the sake of it.

Tap Speak Sequence is a simple yet very useful app but it is only one part of Oliver’s communication system. He also uses an auditory and visual scan PODD communication book (as he has a significant vision impairment) speech generating device controlled by 2 switches. With these more complex methods, Oliver has managed to write a series of poems that reflect his thoughts on his life, disability and many of his challenges. He has published a coffee table book that highlights his poetry as well as the beautiful photographs of his friend, Barbara Bayley. You can find details of this on his Facebook page – Oliver’s Choice, or contact us at Two Way Street

Oliver also used his app to present a lecture for us at Two Way Street as part of our ‘I’ve got something to say’ lecture series, where people who use augmentative and alternative communication (AAC) present lectures about their own experiences, interests, and passions in life. Oliver uses his book and device to write the speech, and then it’s programmed into the app so that he can read it out to the audience in a timely manner. The combination of different systems means that he can say whatever he needs to say, but also say it quickly when necessary. There are many other sequences on his device too and along with his venting, he especially likes his whinging sequence for days when he needs a bit of sympathy. It includes a messages like ‘what about me’, ‘poor me’, and ‘I just need some attention’.

We all need a whinge and a vent sometimes. Of course Ollie can still do this with his PODD or device too, but sometimes getting it out quickly and easily is the most important thing.

If this is your first time reading this blog, or if you haven’t read it for a while, please be sure to read The Background Story to understand more about my posts and the beliefs that underlie them.